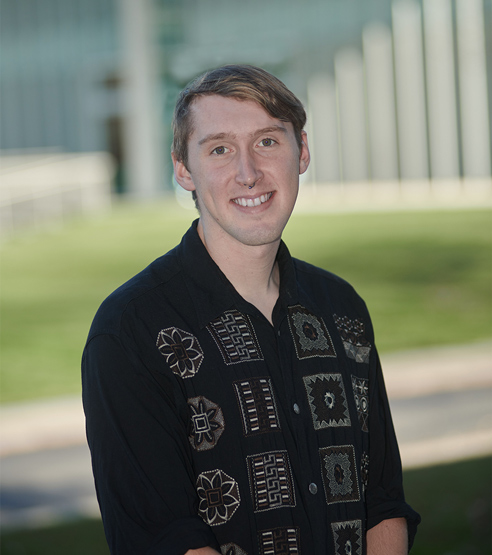 Jeffrey Behnke is close to having most, if not all, of the traits and characteristics required to work in federal law enforcement, more specifically with the United States Drug Enforcement Administration (DEA).

“I always wanted to be a federal agent,” said Behnke. “Working for the DEA would be cool. It’s something I’ve wanted to do, even before the military.”

Prior to Behnke enrolling in Marywood University’s criminal justice program, he spent three years overseas as a combat engineer in the United States Army. He’s now helping the Veteran Affairs Office as a work study for Raul Sanatana Nuñez, Marywood’s Director of Military and Veteran Services.

“Raul is my biggest supporter, said Behnke. “I can’t thank him enough for all of the support he’s given me. He’s been there for me since day one. This community is unlike anywhere else. I can say the same about my professor, James Kanavy. I have so many stories that I could share. The community is what sets Marywood apart.”

Behnke really came into his own in 2022. He was the Atlantic East Conference individual champion for Men’s Track & Field, earning First Team All-Atlantic East honors for Pole Vault. He was also selected as the Veteran Affairs Representative for The Student Government Association (SGA). Adding a college degree to an already impressive resume, which includes deployments to Bulgaria and Korea, is something Behnke believes will set him apart from the competition.

“I try to represent the VA (Veteran Affairs) as best as I can,” said Behnke. “One thing I’ve learned from my time in the Army is things can always be worse. You need to appreciate what’s in front of you. When you support others, you’ll see others support you.”

Behnke’s transition to student life has been a successful mission, to say the least.

Marywood University is consistently recognized for supporting the distinctive educational needs of its veteran, current military, and dependent students, and holds several national accolades, including the 2022-2023 Military Friendly® School designation, ranking in U.S. News and World Report’s “2022-23 Best Colleges for Veterans,” and a 2022-23 national endorsement for “Military Support” from Colleges of Distinction. For additional information on the office of military and veteran services at Marywood University, please visit: marywood.edu/academics/success/veterans-services.