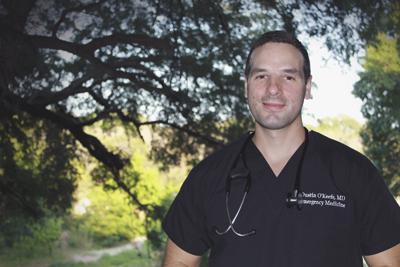 Dustin O’Keefe ’05 thought about a career in medicine back in high school, but wasn’t quite sure what that might be. Marywood’s highly regarded Physician Assistant program drew him to the University, but it wasn’t long before he did an about face. He switched his major to Biology/Pre-professional track, and took aim at med school.

“I found strong support and great mentors in Dr. Deborah Hokien and Dr. Peter Eden (then Chair of the Science Department),” Dustin says. “Small classes and personalized attention from great faculty definitely molded me, and I believe I had a better education than most in bigger universities. There were many research opportunities, and I was able to independently develop a protocol, write a grant proposal, and design my experiments,” he adds.

That strong mentorship and faculty accessibility provided, in effect, the big guns Dustin could roll out for medical school, so he applied well-armed with enthusiastic letters of recommendation from Marywood teachers and mentors. Temple University had been his first choice, and he was one of 180 selected that year out of 10,000 applicants.

He also joined the U.S. Army through the Health Professions Scholarship Program. This, Dustin says, was certainly a big financial advantage—but in addition, he adds, “Army residency training programs are among the top in the country, and that was also a big draw for me. “

Perhaps above all, though, it meant an opportunity to continue a family tradition of service to the nation. “I have many cousins and siblings in my generation who have joined the armed services in many different capacities,” Dustin says. Among these is his youngest brother, Dylan, who received an ROTC scholarship and older brother, Dennis ’04, who earned his MBA at Marywood and is an intel analyst with the National Guard.

Other O’Keefe family Marywood alums, incidentally, include his sister Danielle O’Keefe Mervau ’07, who earned her degree in elementary education—and who has written a children’s book, illustrated by younger brother, Devon O’Keefe ’12, who received his BFA in Illustration.

Before joining the Army, Dustin had already allied himself with an important “commander in chief,” when he met and married his wife, Carlin, a Penn State grad with a degree in Education, back home looking for job opportunities. It happened almost literally in the blink of an eye. Dustin was working at Northeastern Eye Institute, waiting out med school applications. Carlin came in to get her eyes checked—the very day Dustin happened to be working with the doctor she happened to be seeing. They ended up seeing eye-to-eye, so to speak. The rest was history.

A very recent part of that history is lively twin boys, Maddox and Elijah.

Today, Captain Dustin O’Keefe is stationed at the Carl R. Darnall Army Medical Center, Fort Hood, Texas, where he is starting the second year of a three-year internship program in Emergency Medicine, with a goal of becoming a board-certified Emergency Medicine physician. “I love the fast pace, quick decision making, and diversity of patients and problems,” Dustin says. “My time is spent mainly in the emergency room…seeing patients, learning as much as I can, reading, giving lectures, conducting research.”

A major research part involves looking at the effect of Zofran (an anti-emetic medicine frequently used in emergency rooms) and its relationship to heart contraction.

As for future plans: “… not sure if I’ll stay in the Army, but I’m enjoying army medicine… interested in becoming a practicing physician…where I can apply research. I’m definitely a people person.
“I am honored to serve and watch over the health of soldiers and their families,” Dustin says.

“After I graduate from Army residency…well…” he concludes, “we’re open to whatever God decides.”