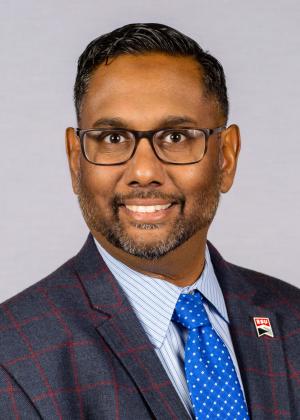 Dr. John explains that, as a freshman student at Marywood in the 90s, he felt supported as a student by students and faculty, but that diversity support services weren't fully developed at that time. He said, “I began my college years as a commuter student. As such, I still enjoyed the support of my family at home. While I felt at the time, and on reflecting upon it now, that those support services would have helped a great deal, I overcame any of the challenges I had with the support of my family and friends.”

While the Black Student Union didn’t exist at the time of his undergraduate studies, Dr. John found his best connections were made through joining student groups and as a member of the communication arts department cohort.

Moving to Scranton, Pa., from Trinidad and Tobago in the Caribbean proved to be its own unique challenge. He noted that the support services that are offered on the University’s campus today, which have a positive impact for all students, could have helped alleviate some of the challenges he had with academics and adjusting to college life.

Dr. John said, “I had a hard time during my first year to two years after moving to Scranton. I nearly lost my financial aid and scholarship as a result of doing poorly in my classes. I was able to rebound during my sophomore year, but I truly wish that the diversity services were fully online at that time.”

Dr. John’s favorite memories of being a student at Marywood include participating in groups and clubs, but most memorable was serving as an orientation advisor. He said, “It was exciting to see new students coming in—especially new students of color. It felt good to see other people who looked like me.”

Dr. John recently accepted a position at Cedar Crest College, where he will serve as the executive director of Diversity and Inclusion. Having had an array of expertise in the field, and drawing from his own experiences as a student, Dr. John is excited for this opportunity to continue to advance diversity efforts in and out of higher education.

Asked what advice he would give to current and future students of color, Dr. John said, “Always seek out those resources that are available to you on campus. Speak to one another. If you’re not comfortable with the community, let that be known—not just because of color—for any reason—if you don’t speak up, nobody will be able to point you in the right direction or offer the help that you need.

LEARN MORE ABOUT STRATEGIC LEADERSHIP AND ADMINISTRATIVE STUDIES AT MARYWOOD »