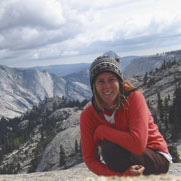 “I am interested in finding creative ways to solve environmental problems. I really love teaching, and I want to teach good science that is going to influence environmental policy.”

After graduating from Marywood in 2004, Ryals traveled the country, exploring her academic interests at various institutions. A recent graduate of the University of California, Berkeley, Ryals earned her Ph.D. in Soil Biochemistry and Ecosystem Science. While there, she focused on the impact of climate change on carbon storage and the nitrogen disposition effects on California soils. In short, her research looks at how farmers and ranchers can manage their land so that they can help solve climate change.

When asked how her undergraduate years at Marywood have helped to shape her career, Ryals says that the liberal arts education she received made her realize that science is not just about field work or test tubes, but, she says, science is about people and the impact the scientific process can have on the world.

“[At Marywood], I learned a lot about how science is actually done,” she says. “I really valued the liberal arts education I got there because environmental problem solving is not just about science. It is about people.”

Ryals is passionate about climate change education and outreach, and she has a history of putting her ideas into practice. As an undergraduate, Ryals was one of the first students to advocate for the use of clean, renewable energy on Marywood’s campus. A free-standing wind turbine was later installed, a machine that harnesses wind energy to supplement the power to the Aquatics Center.

Ryals is presently completing a two-year post doctorate at Brown University, where she is continuing her work focusing on reducing greenhouse gas pollution.

“I am interested in finding creative ways to solve environmental problems,” she said. “I really love teaching, and I want to teach good science that is going to influence environmental policy.”