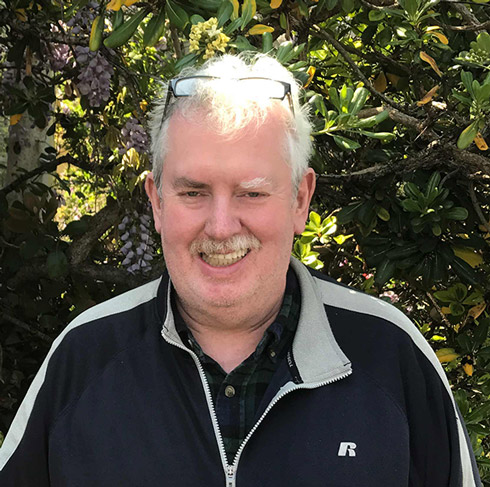 Bill Hines was expecting a routine procedure when he went for his first colonoscopy at age 52. However, the results were anything but routine—two large tumors were found and eventually required a 9.5-hour surgery. Stage II colon cancer was diagnosed. After post-surgery complications from a series of bowel obstructions, he needed another surgery to prevent any further obstructions and to correct the original resection. That was five years ago, on December 21. As he celebrates this milestone fifth anniversary of cancer survival, Mr. Hines is grateful for the gifts of life and hope he received. He wants to continue to share those gifts with others.

A lifelong resident of Scranton, Pa., Mr. Hines was a guest teacher with the Scranton School District, as well as at the former Bishop Hannan High School in Scranton and at Seton Catholic High School in Pittston. He also has taught programs at Marywood. Mr. Hines, who holds a Master of Library Science degree from Long Island University (1988), as well as a Bachelor of Arts degree in Legal Studies/Liberal Arts from Marywood (1982), has worked at the Scranton Public Library and was the Library Director at The Scranton Times-Tribune, where he also served as an arts/travel writer. He won an American Library Association conference scholarship to New Orleans, La., and has presented workshops on grants and public relations at the Pennsylvania Library Association and the Pennsylvania School Library Association annual conferences. Additionally, Mr. Hines was one of the original founders of “College for Kids,” and he taught classes for many years at Marywood’s former Institute for Senior Learners (now called the Lifelong Learning Institute).

Drawing professional and personal inspiration from his late friend and longtime Marywood librarian, Sister Gilmary Speirs, IHM, Mr. Hines has a long history of community service, including his current board memberships with the Marywood Alumni Club (Scranton chapter) and the Mountain View Care Center Auxiliary (in memory of his mother, Dolores). He has frequently guest lectured for a number of community organizations, including a recent presentation about theater to the Century Club of Scranton. His past volunteer work has included several board terms for the Broadway Theatre League of NEPA, Friends of the Scranton Public Library, and the Northeast PA Philharmonic.

While he is single, Mr. Hines has been helped by family, friends, and neighbors throughout his journey of recovery from cancer/IBS and total knee replacement. He is passionate about reminding people that you can truly thrive, not just simply survive, after the disease. Since recovering from his cancer surgery, Mr. Hines has shared his story publicly and has used every opportunity that he can to encourage and educate others. His continued colon cancer surveillance includes a colonoscopy every year, CT scans, and CEA blood work (tumor markers) twice a year. He also had two total knee replacements, and he continues his treatment, including water therapy at St. Joseph’s Center and physical therapy at Moses Taylor Hospital.

“Make no mistake; staying active makes healing from any form of cancer more effective,” stated Mr. Hines. “The five-year anniversary is a milestone event on my health journey. I’m still here and alive!”

He offered a six-step guide for those who will soon undergo a colonoscopy:

LEARN MORE ABOUT PRE-LAW AT MARYWOOD »