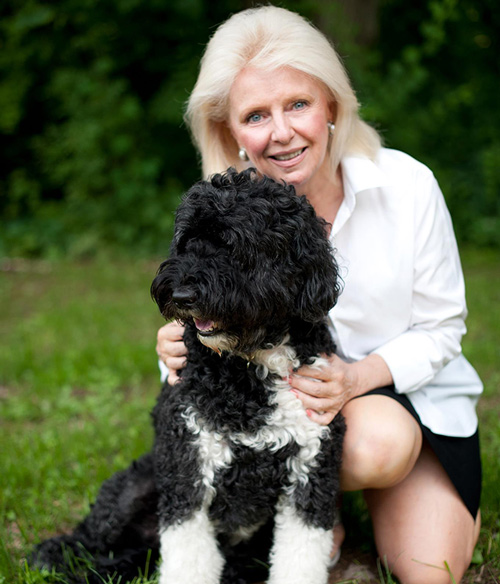 Math + Literature = an Equation for Success

Don’t tell Marianne Waering Prokop ’66 that you can’t mix math and literature, because she already has done so in award-winning ways. Under the pen name, MW Penn, she writes stories and poetry for young children to introduce them to the seminal ideas of mathematics.

Marianne’s interests—math and literature—are not separate worlds. Her goal is to bring the disciplines together and make learning fun. She says, “Too often we associate mathematics with computation alone. Computation is an important part of math, but math encompasses so much more: problem solving; number; pattern; order; measurement; spatial relationships; symmetry. In addition, statistics, data analysis and graphing–tools necessary to remain informed citizens of a democracy–are part of its broad scope.”

Her first children’s book, Sidney the Silly Who Only Eats 6, won the Connecticut Press Club Communication Award for best children’s book of 2007. Since then, she has published several more children’s books combining math with literature, a teacher’s guide to introducing math concepts through stories, and a math dictionary for grades K-8—recognized for its accurate and unique graphics. Marianne has published poems in several anthologies, including the International Rotary Club literacy initiative, A World of Stories, and Caduceus from the Yale Press, and in the magazine Highlights for Children.

Most recently, her second young adult novel, The Knight of the Orb, won the 2017 Press Club Communications Award for best young adult novel of the year. She also had a two-page spread in the February 2018 edition of Highlights for the poem "Hideaway." An active member of the National Council of Teachers of Mathematics (NCTM), Marianne has reviewed books and articles for NCTM publications and presents sessions on combining children’s literature with mathematics and on modeling operations with fractions at national, regional, and statewide conferences. She spoke at the NCTM national conventions in Indianapolis (2011), Philadelphia (2012), Denver (2013), New Orleans (2014), Boston (2015), San Antonio (2017), and Washington, D.C. (2018).

Marianne’s power point presentations of the modeling fractions sessions for NCTM state and regional conferences are available on YouTube; in these sessions she models each of the Common Core State Standards for teaching fractions in grades 3, 4, and 5 in both area models and on the number line. She has appeared at the Associated Teachers of Mathematics in Connecticut (ATOMIC) conference every year since 2007, at New England, Florida, New York, and Pennsylvania NCTM affiliate conferences, and at the Ten County Mathematics Conference in New York, returning to these conferences whenever her schedule permits.

Highlighting the interdisciplinary aspect of her work, Marianne presented a session and chaired a panel on interdisciplinary study at the national conference of the National Council of Teachers of English, and she often hosts an author’s table at the NCTE Books for Children luncheon. She visits classrooms and libraries to read her work and introduce children to the different, though related, worlds of mathematics and poetry. Most recently, she has been visiting schools in the Gainesville, Florida, area.

This seemingly unusual blend of math and literature has composed a second career for Marianne. Before writing books for children, she designed software systems for AT&T, the University of Florida, and the FDA. Software documentation and manuals led to a career in technical writing; subsequently, she published over 50 magazine articles in the field of architectural stone.

What’s next? “I'm in the midst of writing a book about teaching young children to code,” said Marianne. “I find that many teachers, especially older teachers, are resistant to the idea of teaching programming languages to children: they present me with a myriad of reasons why it's not a good idea. However, children take to coding quickly. Computers and tablets are the common way that so many now read and write, and they really enjoy the ease of writing, illustrating, and sharing stories on a screen.”

Learn more about Marianne (MW Penn) and her books at https://mwpenn.com.

LEARN MORE ABOUT MATHEMATICS AT MARYWOOD »