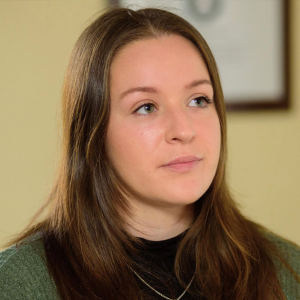 A Path Rooted in Service

Standing quietly as fellow veterans reminisced about their deployments at the annual SALUTE induction ceremony, Kelsey Glennen has her own story to share; one that interweaves service, academics, leadership and discipline and spans from her childhood home in Sussex County, New Jersey to the deserts of Kuwait and finally to Scranton, where Glennen stepped foot on Marywood’s main campus for the first time before her graduation.

Born into a family with a history of addiction, where money was tight and pooling the funds to attend college was a concern, Kelsey considered joining the airforce in order to take advantage of the educational benefits it provided its members.

Her stepfather, an army veteran, swayed her to join the army instead. She was 17 years old. Through the years, Glennen adapted to the demands of military and academic life and struggled to maintain her own mental health.

Initially, she joined the military as a way of advancing herself professionally, 9 years later, she chose to stay because of the army’s culture of camaraderie and direction.

Now, 26 and preparing to receive her master’s degree in social work, Glennen is putting her leadership skills to the test as a staff sergeant and mortuary affairs specialist in the army and as a social worker with her eye on the future in her civilian life.

Glennen’s road to becoming a licensed social worker was not always a clear path, but it was always a path rooted in service.

She initially intended to study forensic science as it had a direct correlation with her duties in the military, Glennen said. “But I had a passion for helping people and after growing up in the type of family dynamic that I did- it just really drove home the fact I wanted to help people and make a difference.”

Instead, she opted to meld her passion to serve those in her community struggling with addiction and her academic journey. She studied behavioral health for her undergraduate degree at Alvernia University, where she crossed paths with David Reyher ‘04. Reyher was Glennen’s advisor. When the time came to consider her next academic move, he  guided her to a master’s degree in social work citing that, being a broader field, it granted her more flexibility in the jobs she would be able to hold.

Marywood had a number of selling points for Glennen. It was in Pennsylvania, it was highly rated among veterans, and the school’s practical approach to social work was more appealing than the theoretical approach of other programs, Glennen said. “A lot of schools focus more on research and I wanted a program that focused on the client.”

In 2019, Glennen’s academic career went on hiatus when she was deployed to Kuwait for 10 months. On her first deployment, Glennen supervised a team of 5 soldiers for the Theater Mortuary Evacuation Point. Their shifts were long and often unpredictable.

“It was the first time actually completing my job as a mortuary affairs specialist and the first time I was exposed to the effects of war,” Glennen said. While not in a combat zone, the realities of conflict were apparent in the deceased under Glennen’s charge. Causes of death ranged from firefight related injuries to suicide and common passing.

She took a year off from her studies to focus on her duties abroad, but she stayed in touch with the faculty in her department and focused on ensuring her course work would resume upon her return.

While in Kuwait, she was able to line up the needed field experiences to finish her degree. Upon her return in 2020, Glennen took advantage of the program’s online coursework to start her summer courses while quarantining in Texas due to the COIVID-19 pandemic.

Outside of her military duties, Glennen is employed full time at the Children’s Home of Reading working to rehabilitate juvenile offenders and victims of sexual assault.

“It’s hard to separate myself from my clients, sometimes,” Glennen said. “So many of them have been through so much at such a young age [...] but the best part of my job is helping my clients reach their goals and seeing them capable of living a more positive life.”

Her time at Marywood’s Lehigh Valley Campus  pulled her out of her comfort zone and allowed her to grow in her professional and personal life.

“It’s been night and day in my own practice with my own clients, using the insights I gained from Marywood and the different skills I honed in class,” Glennen said. “I think going to school for social work not only taught me how to be a good social worker but also allowed me to do my own healing and processing.”