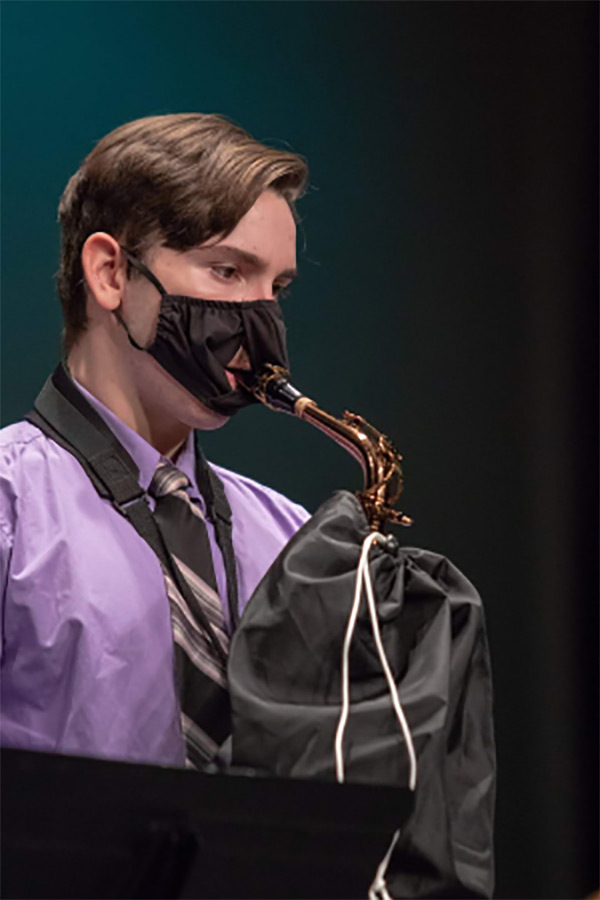 Music Education Major adjusts to Performing During a Pandemic

From the moment that his elementary school music teacher suggested he play the clarinet, John Kear, Lake Ariel, Pa., junior music education major, has been playing the instrument in various festivals and band competitions. In addition to playing in the band, John plays in the orchestra and jazz band, as well as singing with the Chamber Singers at Marywood.

John was drawn to Marywood because of its location. He said, “I am fond of my area, and the fact that Marywood has such a great music program—one that I was exposed to during high school through festivals and band competitions. I was also excited to continue studying with David Romines, D.M.A., associate professor of music education, director of bands and co-chairperson of the Music, Theatre, and Dance department at Marywood University.”

John was not a stranger to singing, and he joined the choir during his senior year of high school. At the suggestion of friends at Marywood, John auditioned for the Chamber Singers at Marywood.

John recalls, “I had to have a musical selection prepared. I was impressed by the intellect of Rick Hoffenberg, D.M.A., associate professor of choral conduction and co-chair of the Music, Theatre, and Dance department at the University. I remember being tested for tonal memory, as well as being able to sight read.”

In addition to playing in the band, orchestra, jazz band, and Chamber Singers, John is vice president of NAfME, the National Association for Music Education. He also assists with the String Celebrations and the Jr./Sr. Wind Band Celebrations.

John is also excited to return to his favorite part of being a student at Marywood—that of getting together with fellow students, as they gather in the Sette LaVerghetta Center for Performing Arts—just talking and hanging out.

While John enjoys the performances where the culmination of his hard work pays off, John enjoys rehearsals even more, because he feels he learns the most from being in rehearsals. As such, he is looking forward to rehearsing and performing post-pandemic.

“I love what I learn in rehearsals, and I enjoy sharing what we’ve learned with the community at performances, but, above all, I love the approachability of all the faculty at Marywood. They [faculty] know so much. You can ask them questions any time of the day—whether about music or practicing—anything music related—they are very knowledgeable.”