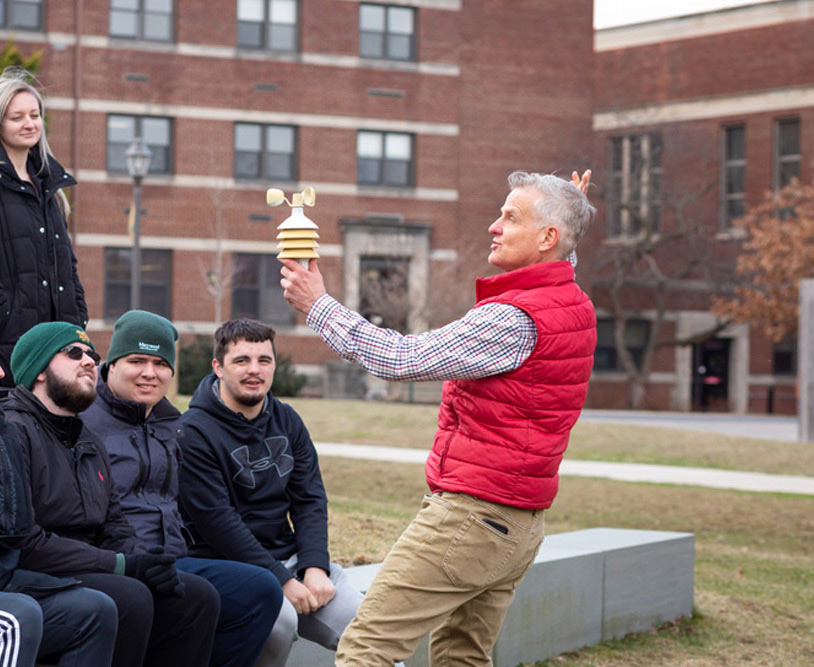 Today is National Weatherperson’s Day, so, with that in mind, Marywood University’s own Joe Snedeker reflects on his love of science and teaching, acknowledging his rocky start at WNEP-TV, and becoming a household name throughout northeast Pennsylvania.

Joe Snedeker isn’t your typical weatherman by any measure. When he began his career as a part-time meteorologist at WNEP-TV in 1993, some believed his unconventional reporting could be interpreted as detrimental to the station’s image. At that time, the stoic on-air presence of weathermen, such as retired WNEP-TV meteorologist Tom Clark, was the familiar style that most of the public were accustomed to viewing. However, Joe’s stubbornness about being different from his predecessors is a huge reason why he’s revered by so many today.

“People began to take notice of me after I did the weather wearing shorts on a 15-degree day,” said Snedeker. “I didn’t have anything to lose, so I figured I’ll just go out there and be me.”

Joe’s station manager couldn’t understand a simple, but important, concept - Joe wasn’t performing schtick. To put it even more simply, Joe was just being himself. Word of WNEP-TV’s wacky weatherman quickly grew throughout NEPA, but it wasn’t until 1997 when Joe’s stock truly began to soar.

“I’ve always been an energetic guy,” said Snedeker. “I was looking for something to do one summer. ‘Maybe I’ll go to Atlantic City,’ I thought to myself. ‘Maybe I can ask for a dime for each mile I cross, or something like that.’ I wasn’t sure anyone would donate, but I gave it a shot.”

That summer, unbeknownst to most in the NEPA community, Joe volunteered for a 500-mile bike ride to Atlantic City, New Jersey, for the purpose of raising donations for Saint Joseph’s Center. Sponsored by local businesses, the charitable bike ride, now known as “Go Joe”, gained massive attention after WNEP-TV featured a news segment capturing Joe’s good deed. Fast forward to 2021, when “Go Joe 24” raised $628,000, the most donations the campaign has ever received in its 20+ years of running. The charity bike ride catapulted Joe’s celebrity status throughout northeast Pennsylvania.

By 1999, Joe switched from part-time wacky weatherman to full-time megastar meteorologist. Most of his viewers weren’t aware that, for more than 10 years, Joe taught geoscience at Carbondale Area High School. However, the decision to leave teaching was something Joe didn't take lightly.

“Life is like a tennis match,” said Snedeker. “You have to serve, and you have to return the serve. The kids served me energy in the classroom, and I served it back. The challenge of going back and forth, keeping my class stimulated, got my endorphins going. When I had the chance to return to teaching years later at Marywood, I didn’t hesitate.”

After several years of being removed from the education field, Joe yearned for a return to the classroom. Whether it was superb timing or by pure coincidence, he learned of a part-time faculty position opening at Marywood University in 2007, which aligned with his meteorologist schedule at WNEP-TV. Joe has been living his best life, as both a meteorologist and teacher, ever since.

“The opportunity to educate young minds leaves me feeling fulfilled,” said Snedeker. “I’m often asked what I consider myself first, a meteorologist or teacher? I say neither. I’m a practitioner of geoscience, how about that?”