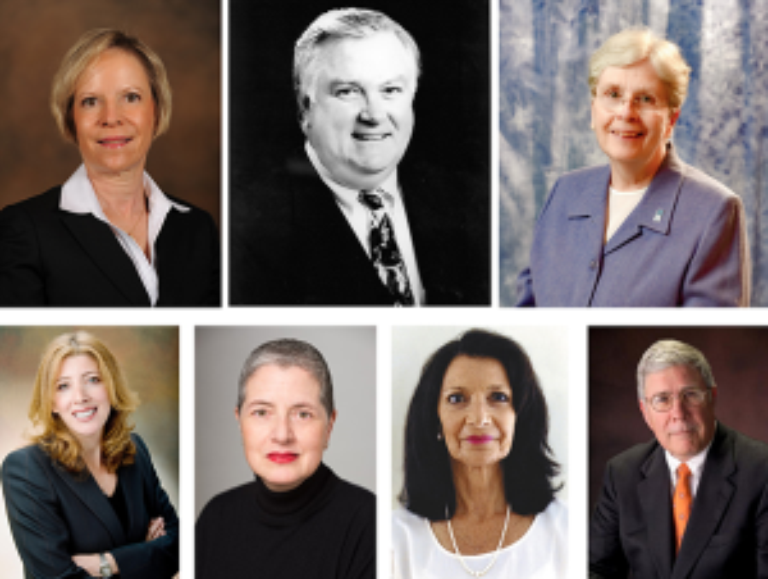 New Trustees and Board Officers

Sister Mary Persico, IHM, Ed.D., Marywood University President, recently announced that three people have been elected to Marywood’s Board of Trustees, including two trustees who have previously served on the board and one who is serving in an ex-officio capacity. Board members include Col. (Ret.) Lorraine R. Breen, Alexandria, Va.; William R. Lynett, Clarks Summit, Pa.; and Sister Kathryn Clauss, IHM, Ph.D., Scranton, Pa. Trustees are elected for a three-year term, 2022-2025.

Col. (Ret.) Lorraine R. Breen, Alexandria, Va.
Col. (Ret.) Breen, who presently serves as Special Assistant to the President, Business Operations, Uniformed Services University of the Health Sciences, Bethesda, Md., has demonstrated leadership success in the health care, food service, and military professions. She previously served as a Marywood trustee from 2007-2019 before her current election. Following her graduation from Marywood with a bachelor of science degree, magna cum laude, in nutrition and dietetics, she traversed the nation numerous times and traveled around the world, while performing in prestigious positions of senior health care leadership in both the civilian and military sectors, nationally and internationally. Along the way, she also earned a master of science degree in human resources management from Chapman University, Orange, Ca. A member of the Academy of Nutrition and Dietetics (AND), Col. (Ret.) Breen serves on the Academy’s Executive Committee for Food and Culinary Professionals, its Dietetic Practice Group, and as the policy & advocacy leader for Food and Culinary Professionals in AND’s Dietetic Practice Group. She is the corresponding secretary, Pentagon Chapter, of the National Society Daughters of the American Revolution. She has earned multiple awards and achievements, including the Defense Meritorious Service Medal, Legion of Merit, Meritorious Service Medal with five Oak Leaf Clusters and scores of other prestigious military awards. Additionally, Col. (Ret.) Breen was the keynote speaker at Marywood’s Opening Convocation in 2013 and was awarded an honorary degree during the ceremony. The Marywood Alumni Association recognized her with the 2013 Award of Excellence in Health and Human Services.

William R. Lynett, Clarks Summit, Pa.
Mr. Lynett is the Publisher Emeritus of The Scranton Times-Tribune. Mr. Lynett was publisher of The Times-Tribune from 1966-2012, CEO of Shamrock Communications from 1972-2009, and president of The Daily Review (Towanda) from 1977-1984. He and his family have a long history of civic and community leadership in Northeastern Pennsylvania and at Marywood University. He previously served as a Marywood trustee from 2007-2019 before his current election. Mr. Lynett also has served a number of professional, cultural, and educational organizations with distinction and in leadership capacities. A graduate of St. Paul’s High School, he earned a bachelor of science in accounting from the University of Scranton and is a graduate Harvard Business School’s Owner/President Management Program. Additionally, he served in the 55th Brigade of the Pennsylvania National Guard as a Public Information Officer. Mr. Lynett has merited numerous honors and awards, both for his professional achievements and his philanthropic efforts, including a listing in Marques Who’s Who in America, the Pennsylvania News Media Association’s Lifetime Achievement Award, and induction into the Pennsylvania Association of Broadcasters Hall of Fame. Along with his family, he received Marywood’s Presidential Medal as well as its “Lead On” Award.

Sister Kathryn Clauss, IHM, Ph.D., Scranton, Pa.
Sister Kathryn Clauss, IHM, Ph.D. Scranton, PA, elected as president of the Members of the Marywood University Corporation (IHM Congregation) in 2022, is serving on Marywood’s Board of Trustees in an ex-officio capacity. Prior to her election, Sister Kathryn served at Marywood as a liaison to ASEC, Fricchione Early Childhood Center, Marywood Heights, NativityMiguel, and the Veterans Resource Center. She also was a program manager for the Religious Formation Conference (Chicago, IL) and facilitator for congregations of religious women and men. Educated by the IHM Sisters in Scranton at St. Clare’s School and Marywood Seminary, she entered the IHM Congregation and continued her education at Marywood, where she received a bachelor of arts degree in education and a master of arts in counseling. Sister Kathryn later received a Ph.D. in marriage and family therapy at Seton Hall University, South Orange, N.J. She has devoted much of her ministry and professional endeavors to the cause of education, serving as a teacher, vice principal, and principal in elementary schools in Sayre, Pa., La Plata, Md., and Upper Marlboro, Md. She taught in the psychology & counseling program at Marywood (1995-1998), then took on leadership roles as the vice president of mission integration and corporate compliance for Maxis Health Care System at the former Marian Community Hospital, Carbondale, Pa. (1998-2002) and as counselor for missioning and community life for the IHM Congregation (2002-2010). At the end of that leadership term, she returned to Marywood and taught in the education and doctoral programs until 2014. Sister Kathryn once again served as part of her congregation’s leadership team as vice president and councilor for missioning and community life from 2014-2018.

Lisa A. Lori, Esq., Board Chair, Philadelphia, Pa.
Atty. Lori, Philadelphia, is a partner with Klehr, Harrison, Harvey, Branzburg LLP. She represents businesses, including Fortune 500 companies, higher education and health care institutions and individuals, in a full range of complex business litigation and strategic advising matters. She co-chairs her firm’s higher education and healthcare industry groups. Atty. Lori is recognized as a leading commercial litigation attorney in Pennsylvania by Chambers USA (2021-2022). Chambers USA ranks leading lawyers and law firms across the USA based on in-depth market analysis and independent research. She also is a Fellow of the Litigation Counsel of America, a highly selective, invitation-only honorary society of trial lawyers composed of less than one-half of one percent of American lawyers. Selection is based on excellence and accomplishment in litigation and superior ethical reputation. She further is AV Preeminent rated by LexisNexis Martindale-Hubble, the highest rating for legal ability and general ethics, as well as being named a Pennsylvania Super Lawyer by a vote of her peers. In addition to serving on Marywood’s board of trustees, Atty. Lori also is a member of the board of directors of Jefferson University Physicians (2021–present). Since beginning her service on Marywood’s Board of Trustees in 2014, she has served as secretary of Marywood’s Board, and, for the past six years, as chair of the board. Atty. Lori, who holds a bachelor of science degree in fashion design from Marywood University (Scranton, Pa.), earned her Juris Doctor (J.D.) degree, cum laude, from Temple University School of Law (Philadelphia, Pa.), where she served as editor in chief of the Temple Political and Civil Rights Law Review.  Atty. Lori also earned a master of laws (LL.M.) degree in trial advocacy from Temple University (Philadelphia, Pa).

Pia Ferrario, Vice Chair, New York, N.Y.
Ms. Ferrario, New York, N.Y., is the retired CEO of Victoria’s Secret Direct. She had previously served in a number of executive leadership roles at Victoria’s Secret, a subsidiary of LBrands. She also worked in leadership and management positions for Ups’N Downs, Enfield, Conn., JCPenney, Dallas, Tex., John Wanamaker, Philadelphia, Pa., and the Globe Store, Scranton, Pa. Since her election to Marywood’s Board in 2014, Ms. Ferrario has served on the University Advancement Committee and the Committee on Trustees. She established the Angela and Pio Ferrario Memorial Endowed Scholarship at Marywood University, and she is the recipient of the Sisters of IHM Spirit Award. Ms. Ferrario’s volunteer affiliations also include Catholic Relief Services, Catholic Charities of the Archdiocese of New York, Food Bank of NYC, and the Scranton IHM Congregation, among other faith-based and educational organizations. She is a graduate of the former Marywood Seminary (Scranton, Pa.) and studied art education at Kutztown University (Kutztown, Pa.).

Susan Cognetti, Secretary, Clarks Green, Pa.
Mrs. Cognetti, Clarks Green, serves as a paralegal and office manager at Cognetti & Cimini. Since beginning her service as a Marywood trustee in 2014, Mrs. Cognetti has served as chair of the Committee on Trustees and as a member of the Enrollment Services and Student Success Committee and the Executive Committee. She has been the secretary of the board since 2016. Mrs. Cognetti serves as Eucharistic Minister at St. Gregory’s Parish, where she was also Parish Coordinator for First Penance and First Communion for more than 25 years. Upon graduation from St. Mary’s High School (Manhasset, N.Y.), she was a National Merit Scholarship Semifinalist and a New York State Regent Scholarship Recipient. A graduate of Manhattanville College (Purchase, N.Y.), where she majored in psychology and was certified to teach Elementary Education, K-8, Mrs. Cognetti later earned her Paralegal Certification from the Pennsylvania State University (State College, Pa.).

James G. Gavin, M.S.W., Treasurer, Scranton, Pa.
Mr. Gavin, Scranton, recently retired after 21 years as President/CEO of Community Care Behavioral Health Organization, a UPMC insurance company, and is currently a senior advisor to executive leadership. Elected to the Marywood University Board of Trustees in 2013, Mr. Gavin is a member of various committees, serving as treasurer and chair of finance since 2016. A professional social worker, Mr. Gavin worked in the behavioral health field for 47 years in clinical as well as management positions. Mr. Gavin holds a bachelor of science degree in sociology from the University of Scranton (Scranton, Pa.) and two master’s degrees—a master of social work and a master of managerial science—from Marywood University (Scranton, Pa.). He and his wife, Cathy, were honored with the "Lead On" Award at Marywood's Community Leadership Celebration in 2021.