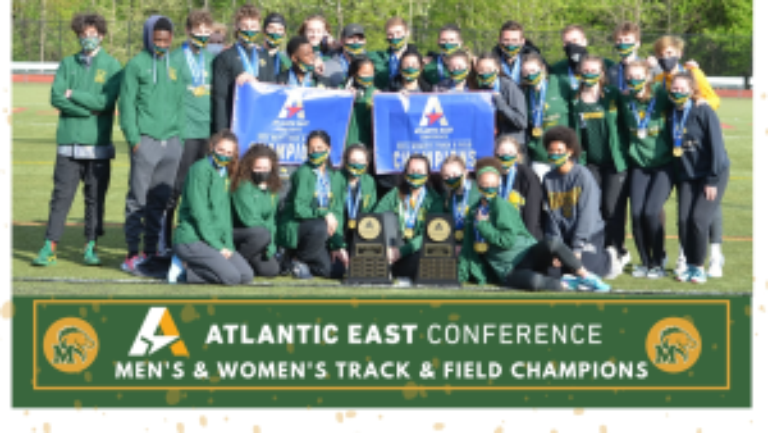 Marywood University won 16 individual and relay events to repeat as Atlantic East Conference Men's Track and Field champions on Saturday. The Pacers repeated their 2019 performance with a resounding 301 points — doubling the combined total of the rest of the conference's participants.

Battling weather conditions and a condensed one-day schedule, the Pacers posted the second conference title in the program's short history. Marywood set one school record at the meet.

Marywood's lone school record came in the 4x100. The Pacers' relay of Jefferson Fontaine, Ryan Benedict, George Thompson, and Noah Schock slashed their previous best — set in late April — by a half-second with a 43.54-second performance. The foursome also took first place in the 4x400 with a time of 3:30.54.

George Thompson (Montrose) hurdled his way to a pair of first-place individual finishes. He was the fastest in the 110 hurdles at 16.46. Thompson finished 35-hundredths of a second ahead of Benedict in the 400 hurdles victory, finishing with times of 59.09 and 59.44, respectively.

Jefferson Fontaine (Wyandanch, N.Y.) proclaimed his role as king of the sprints. He clocked in at 11.27 seconds for a 100 dash title. Fontaine crossed the finish in 22.88 seconds to take the 200 dash.

Trailing him in both races was Noah Schock (Coopersburg, Pa.) with personal-record runs that made their way to the school record books. Shock ran a 11.44-second 100 dash that was the fifth-best at Marywood. His 23.25 mark in the 200 dash counted as the fourth best performance in a Marywood kit. Shock won the 400 with a time of 51.7 seconds.

Michael Kelly (West Scranton) reached the record books by taking second place in the 800. His time of 2:05.17 ranked fifth in program history.

Chris Noldy (Lakeland) dropped 59 seconds off his previous best to finish fourth in the 5K. Noldy finished with a time of 17:44.8.

The Pacers will compete at Johns Hopkins University this week in preparation for the AARTFC Championships in Rochester, N.Y.