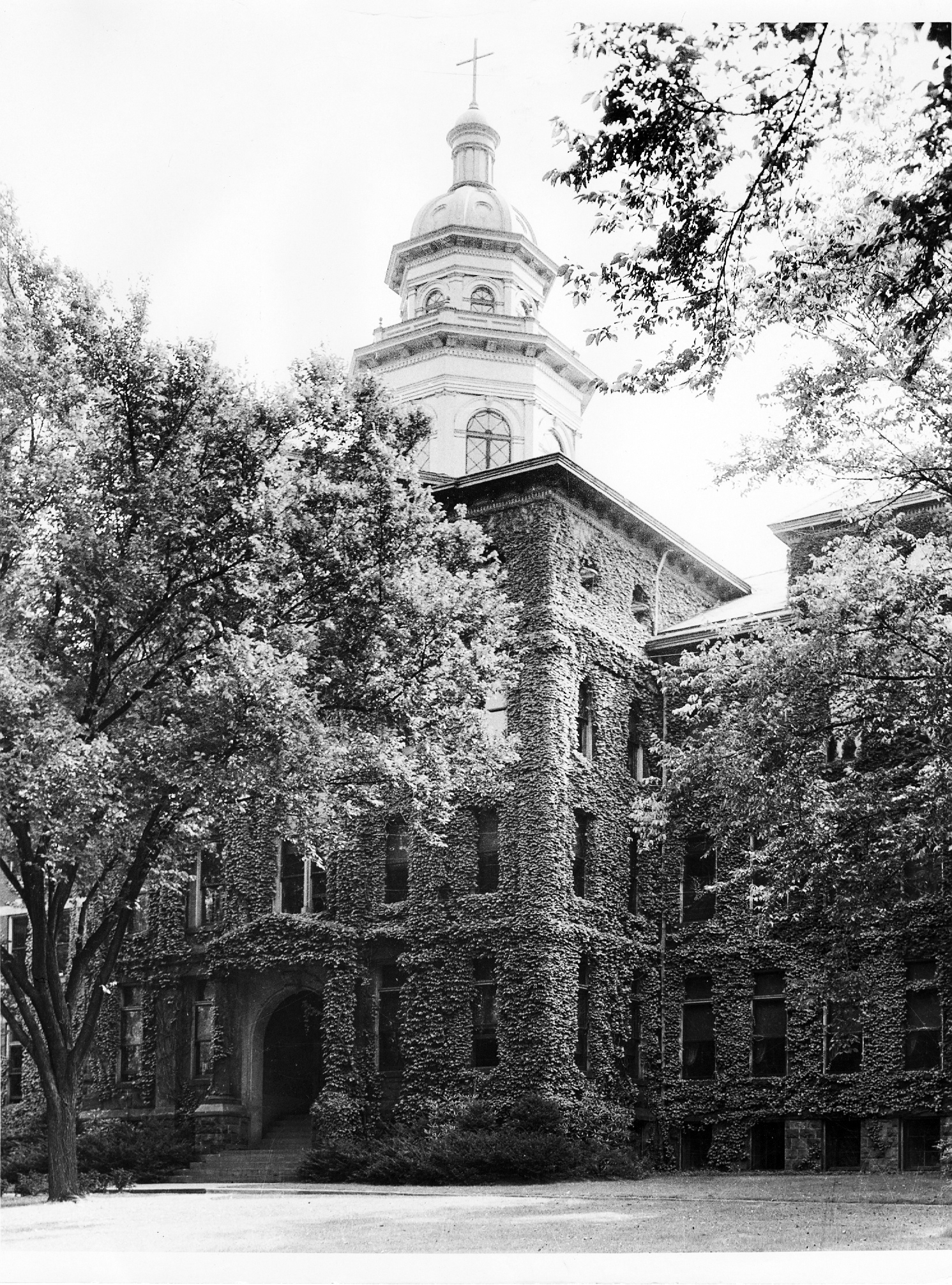 Marywood College opened on September 8, 1915, with a class of 34 women, one of whom was Sister St. Mary Orr, IHM, who later became its eighth president. In 1924, the Liberal Arts building opened. In 1928, O’Reilly Hall (now Regina Hall), an on-campus residence for students, was dedicated. In 1937, a major enhancement of the Liberal Arts Rotunda was completed.

The superiors of the Congregation of Sisters, Servants of the Immaculate Heart of Mary, served as the presidents of the College for almost three decades. Mother M. Germaine O’Neill, IHM was the first president. The actual administration of the College, however, was the responsibility of Sister M. Immaculata Gillespie, IHM, Ph.D., who served as dean from 1915 to 1943. Her influence on the College’s growth and development was remarkable. The vast changes she witnessed during her lifetime, 1863–1947, were astounding. She responded with an openness to the challenges of life that gave Marywood its dynamism and confidence throughout many difficult years. Under her leadership, Marywood acquired degree granting powers in 1917, and these were expanded in 1922 to the awarding of the Master of Arts degree. In 1921, the College became one of the charter members of the Middle States Association of Colleges and Schools. Mother Germaine also initiated the global dimension at Marywood, welcoming the College’s first international students in 1917. For 28 years, her presence was a stabilizing and energizing force. During the early years of the institution, Presidents of Marywood College, who were also Superiors of the IHM Congregation, included Sister M. Casimir Murray, IHM; Sister Mary William Craig, IHM, Sister M. Josepha Hurley, IHM, and Sister M. Marcella Gill, IHM.

Times of Growth and Change

Sister M. Sylvia Morgan, IHM, Ph.D. was the first president of Marywood College whose position was not the result of her being the Superior of the IHM Congregation. Her administration and that of her successor, Sister M. Eugenia Kealy, IHM, were times of great expansion and growth. During this period, four new buildings were constructed, enrollment was almost tripled, accreditations in various professional organizations were achieved, and new academic programs were developed including an expanded graduate division. This growth and diversification occasioned a marked increase in the number of lay faculty members, who joined with the sister faculty in advancing the mission of the College.

Sister St. Mary Orr, IHM, Ph.D. led the College through the troubled sixties. This was, however, another decade of rapid growth and diversification. The Graduate School of Social Work was established in 1967, and the Graduate School of Arts and Sciences became a separate entity in 1968. Five new buildings were dedicated between 1964 and 1968, including the Learning Resources Center, an addition that greatly enhanced the educational capacities of the College.

Sister M. Coleman Nee, IHM succeeded Sister St. Mary as president in 1970. The first year of her administration was marked with a dramatic crisis, the destruction by fire of the IHM Motherhouse, the building that housed the College in its first years. The subsequent years of her administration were more tranquil but no less challenging. Efforts to serve new student populations led to the opening of the Gillet School, a school for undergraduate male students and for adult and continuing education students. During her administration, Marywood responded to the direction set by the Second Vatican Council, intensifying traditional commitment to action on behalf of justice. While fostering students’ personal development of values of justice and peace, the students would become competent and compassionate professionals, well equipped to address the challenges of the global society.  Assuring excellent professional preparation led to the building of the Visual Arts Center and the expansion of the Human Services Center (now the William G. McGowan Center for Graduate and Professional Studies) and the Health and Physical Education Center.

When Sister Mary Reap, IHM, Ph.D. became the tenth president in 1988, she assumed the leadership of a vibrant institution. As Marywood’s longest-serving president, she fostered a legacy of progress, characterized by significant growth and an ongoing commitment to excellence that earned Marywood national accolades as one of the premier Catholic universities in the region. She provided leadership rich in the traditions of service, academic excellence, and responsiveness to the signs of the times. During her remarkable 19-year tenure, Marywood achieved: full co-educational status; dramatic campus expansion through the construction or renovation of 24 facilities, including several world-class facilities—the Insalaco Center for Studio Arts, the O’Neill Center for Healthy Families, and the Swartz Center for Spiritual Life, to name a few; a substantial increase in financial commitments from all donor constituencies; an emergence as the leading provider of graduate education in Northeast Pennsylvania and the first regional institution offering doctoral degree programs; the transformation from college to university status in 1997, and, in 2003, an academic restructuring of the University into colleges.

Presently, the colleges include:

Sister Anne Munley, IHM, Ph.D. served as Marywood’s eleventh president from 2007-2016. With her international expertise as an administrator, educator, and sociologist, Sister Anne further developed a culturally diverse and global educational experience for all students. During her tenure, Marywood University established a new School of Architecture—the first to open in northeast Pennsylvania (2009); the Center for Interdisciplinary Studies (2013); and the School of Business and Global Innovation (2014). She guided Marywood through its Centennial year (2015), overseeing the construction of a new Learning Commons and the Motherhouse and Seminary Morgan Memorial Garden, both of which were dedicated on Marywood’s Centennial Anniversary, September 8, 2015.

Sister Mary Persico, IHM, Ed.D. became Marywood University’s twelfth president in 2016. Sister Mary is passionate about bringing people together. Drawing on her extensive leadership, along with her business and fundraising expertise, she works diligently to ensure that Marywood is the university of choice for talented, diverse, and intelligent students who want to make a positive difference regionally and globally. Since the beginning of her tenure, Sister Mary has established numerous academic and community partnerships to strengthen learning opportunities and guide the University to a strong future.