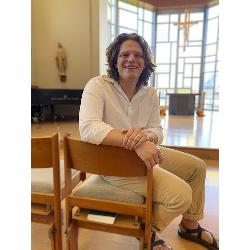 Focused on Serving Others through Faith

Meet Brien McChesney, a Marywood University graduate, who is focused on serving others through faith and with purpose. Brien graduated in May 2021 with a Religious Studies degree, minoring in History, 3-D Art, and Spanish. He was a Maxis Gillet Scholar, Agape Latte team leader, and mentor during his student years at Marywood, in addition to being involved in Greek life, serving as a Resident Assistant (RA) for Housing and Residence Life, and as part of the Men’s Rugby team. After graduating, he returned to the campus that he has considered home for so long.

Brien works at Marywood as a Campus Minister, and his job allows him to continue doing what he was passionate about as an undergraduate—sharing the faith and empowering students. Outside of Marywood, he is a part-time Youth Director at Lake Winola Methodist Church, where he supports the faiths of middle school and high school students.

Brien knew he wanted to attend Marywood when he visited campus, feeling an immediate sense of belonging and community. He was easily welcomed, and pictured himself building long-lasting relationships with students and faculty. Before committing to Marywood, Brien was awarded the Maxis Gillet Service Scholarship, which recognized the outstanding community service he had already done and gave him the opportunity to sustain that service while enrolled at Marywood. The scholarship, along with the welcoming atmosphere, clinched his decision to become part of the Marywood community.

Brien had been interested in Architecture since middle school, even pursuing the major in his freshman year at Marywood. However, his focus shifted when he felt called to ministry. "I enjoyed Architecture, and, to this day, enjoy moving through and admiring the spaces that others have crafted, but God was calling me to ministry, to love and to serve others,” Brien stated.

That profound call led him to change the course of his educational path and his life. Brien became a Religious Studies major, also pursuing minor concentrations in history, Spanish, and 3-D Art, as he began realizing his particular purpose at Marywood.

Brien’s true passions and goals in life are to love, to serve, and to connect with others. He enjoys hearing other people’s stories and inspiring them to do good things throughout their lives, in both times of joy and in times of challenge.

After accepting the job in Marywood’s Campus Ministry Office, he continues to work with and empower current students, just as he looked up to those who inspired his journey. His future goals are framed by his call to ministry.

"I feel called to be a Pastor in the United Methodist Church. I plan on taking a few years after completing undergraduate studies to love and serve other human beings through youth ministry, campus ministry, and nonprofit work as the spirit leads," Brien stated. "I am not certain what this timeline will look like, but I trust that God is using this time as both a time of service and a time to prepare for what is to come. I am excited and hopeful to spend the rest of my days being with the children of God around me, especially those that are marginalized and considered 'the least of these' by the world we live in."