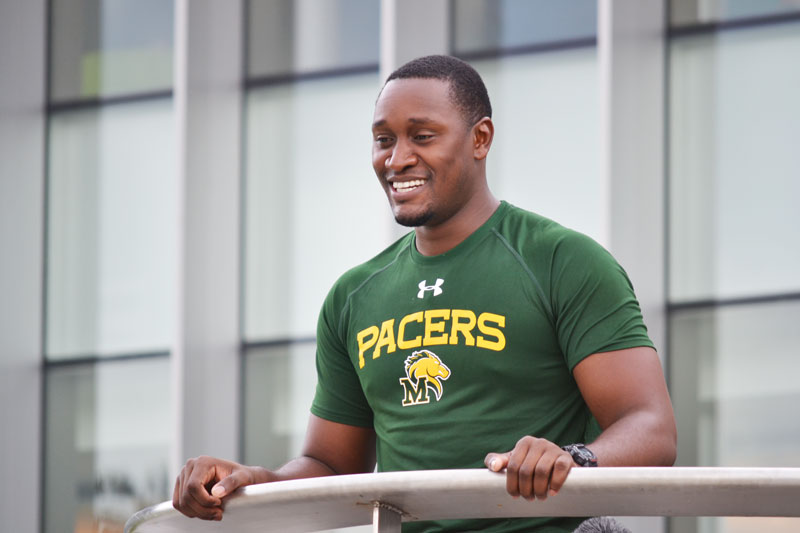 A singular ambition drew Tyler McAlpine to the aviation program at Marywood University: “I just want to fly.” His passion about flying is as contagious as his stated purpose of seeing the big picture.

In 2021, McAlpine graduated from Marywood University with a Bachelor's of Business Administration in Aviation Management Professional Pilot/Flight Operations. He was a member of the Aviation Club, the Student Veteran Alliance, and the Student Government Association.

McAlpine said, “I was looking at the bigger picture. I knew that I could have played football in college, and earned a degree by doing so, but, for me, I was looking to grow as a person, with a goal in mind of maturing and finding what I was most interested in pursuing.”

McAlpine was not the typical traditional undergraduate student. He attended Norristown Area High School. While there, he played a number of sports, but excelled at football. Although he was recruited by numerous colleges for football, when it came time to sign, he found himself gravitating towards the military. As a result, McAlpine signed with the United States Marine Corps.

McAlpine served as a Marine Corps sergeant in Aviation Operations and was a drone pilot. Enlisted from 2012-2017, he was stationed in California, deployed to the Philippines for nine months, and served the remainder of his tenure in Hawaii.

As McAlpine was nearing the end of his Marine Corps service, he was researching colleges and programs. He wanted to return to his home state, and he discovered that Marywood is the only school in Pennsylvania that has an aviation management program. From there, the choice was simple.

There are times when he misses extracurriculars and sports, such as football, swim, track, band, and theatre, but McAlpine explained that, to reach his end-goal, he needs to stay focused on his program and his work schedule.

“Just recently, I allowed myself to walk through the Center for Performing Arts,” McAlpine said. “I avoided it during my freshman year, because I thought the draw to perform or play the trumpet would be too great.”

McAlpine, who currently works as a district staff assistant in the U.S. House of Representatives, continues to soar as he follows his passion of “just flying.”

Tyler McAlpine, senior aviation management/professional pilot/flight operations major, is accustomed to working hard in and out of the classroom. Ambitious and determined are two words that best describe Tyler, who, after completing his service as a Marine Corps sergeant, began researching aviation programs throughout the country.

When finished with his Marine Corps service, Tyler picked up and moved from Hawaii to Pennsylvania, with the goal of becoming a professional pilot. Balancing between work, studies, and flying, Tyler was able to tap into the resources of his professors and his Marywood community to help him succeed.

Tyler said, “My primary professors in the School of Business and Global Innovation are a great resource—especially Capt. Joseph McDonald. Whenever I had any questions in or outside of the class, he made himself available to me.”

Seeing the benefits of having the Aviation Management program attached to the School of Business and Global Innovation, Tyler is able to gain additional support by having a consistent group of fellow students and professors to offer guidance with classes, balancing his work/life schedule, and with studying and training.

There were struggles at times, especially as they related to his Veterans Affairs GI Bill literature, but Tyler turned those challenges into opportunities by learning as much as he could about the process and paying forward that knowledge to other student veterans at the University.

Tyler is putting those skills he learned from navigating the GI Bill into practice at his current position as staff assistant for Congressman Matt Cartwright. His day-to-day duties consist of helping constituents in the areas of social security claims, disability claims, stimulus check receipts, and other constituent services, as well as assisting with the Congressman’s travel schedule

Tyler said, “My mantra, or the best piece of advice I use, is to be self-driven and to have ambition. I advise students to seek involvement in school activities.Through involvement, students, especially diverse students, are able to reach out to more ethnic groups and communities.”

A Student Veteran Alliance member, as well as interim student president for the SVA, Tyler represents other student veterans on the Student Government Association. Tyler sees other people of color in these positions as being able to integrate into the community more successfully. He said, “It helps to break down barriers of race and sex by being involved.”

When asked if there was anything he wished he could do differently or keep the same, Tyler said, “For me, I wish I was more involved from the beginning of my tenure at Marywood. Initially, I thought I couldn’t handle more than working and going to classes, as my schedule was already packed. By making that effort to be more involved, a whole new community and resources presented themselves to me.”

Tyler’s favorite Marywood memory is that of winning a Student Leadership Award. He said, “I honestly thought I was simply going to the ceremony to support other students and have the added benefit of some free food. Winning the Student Veteran Leadership Award—that experience was genuine to me, and it was a really good feeling that boosted my confidence.”

The Marine Corps veteran went from someone who was used to doing things because he had to as a soldier to doing them because he genuinely wanted to. Tyler said, “I can’t stress enough the importance of getting involved. Marywood has a beautiful community of students, faculty, and staff—if students are really looking for a school that is both personable and has high academic standards, then Marywood is the best option, both locally and nationally.”

LEARN MORE ABOUT AVIATION AT MARYWOOD »