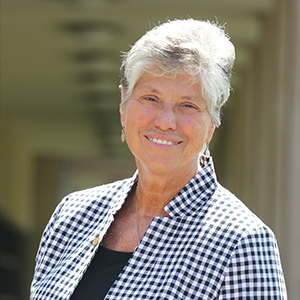 President of the University

Her professional background includes extensive leadership experience. Prior to her presidency, Sister Mary served as Executive Vice President for Trinity Health, one of the largest multi-institutional Catholic health care delivery systems in the nation, where she was a member of a 14-person corporate team and regularly participated in all financial and operational decision making. Sister Mary was the President of the Congregation of the Sisters, Servants of the Immaculate Heart of Mary, from 2002-2010. She also served as the IHM Congregation’s Treasurer from 1994-2002. Sister Mary previously served as an Adjunct Professor of Education at Marywood University; Principal of Holy Cross High School in Delran, N.J.; Principal of Notre Dame High School, East Stroudsburg, Penn.; Assistant Principal of Bishop Klonowski High School, Scranton, Penn.; and as a teacher at both Bishop Hannon High School, Scranton, and Most Holy Rosary High School, Syracuse, N.Y.

Sister Mary earned a Bachelor of Arts degree in French/Education from Marywood. She has a Master of Arts degree in French from Assumption College, Worcester, Mass., and a Master of Arts degree in Education Administration from Lehigh University, Bethlehem, Penn. She also earned an Ed.D. in Educational Leadership from Lehigh University. She has overseen a number of academic and leadership initiatives. For Trinity Health, Sister Mary collaborated in the development of a mission assessment tool, which was implemented in all system hospitals. In 2010, she was a founding member of the Leadership Academy, Catholic Health East/Seton Hall University, which established a certificate program in leadership formation for high-level national health care leaders. From 2008-2010, Sister Mary chaired the board of the African Sisters Education Collaborative (ASEC), which facilitates educational opportunities for women religious in ten sub-Saharan countries. She was a member of the ASEC faculty in 2009. Additionally, she founded and was a teaching team member for the Sponsorship Institute for the IHM Congregation. She also was a teaching team member for the Ministerial Public Juridic Person Collaborative for the Catholic Health Association of the United States.

Sister Mary has extensive business and fundraising experience. She has served on numerous business councils and committees for Trinity Health, including the steering committee for the merger of Catholic Health East with Trinity Health. She initiated and successfully executed a 23-million-dollar capital campaign for the construction of the Pascucci Family Our Lady of Peace Residence, a state-of-the-art elder care residence for the IHM Sisters, which opened in January 2006. She guided Congregation leadership decisions throughout this project, including the decision to escrow funds to pay in full the cost of the facility’s construction. Sister Mary also conducted a capital campaign and facilitated the construction of a 10-million-dollar addition to Holy Cross High School in Delran, N.J.

Presenter and consultant, Sister Mary has given numerous educational and leadership sessions and provided counsel on topics such as communications, resilience and change, finance and financial assets, business ethics, leadership and instruction, safety and risk management, elder care, religious life, sponsorship, mission, discernment, justice, Catholic identity, and the role of laity in the Church. She also has facilitated the community assemblies and congregation chapters of several orders of women religious in addition to the IHM Sisters, including the Sisters of Mercy, Sisters of Saint Joseph, Marist Sisters, Sisters of the Holy Redeemer, and the Bernadine Franciscan Sisters.

Her publications include: CHE Speeds Ahead in Support of PACE, which she co-authored for Modern Healthcare: A Publication of the Catholic Health Association of America, as well as numerous articles for Journey, the publication of the Sisters of IHM, Scranton, Penn. Sister Mary also recorded a series of original radio spots, called Two Minute Messages, which aired on WVMW-FM, Marywood’s radio station, during her tenure as president of the IHM Congregation.

Sister Mary’s board memberships include the Greater Scranton Chamber of Commerce and the Pennsylvania Humanities Council, as well as Mercy Health Regional System, Muskegon, Mich.; Global Health Ministry, Newtown Square, Penn.; Allegany Franciscan Ministries, Tampa, Fl.; and Guest House for Priests and Women Religious, Lake Orion, Mich. She also served on the Finance Committee of the Leadership Council  Women Religious. She is an ex officio member of the Marywood University Board of Trustees and has served on  other education, health, and community boards through the years.