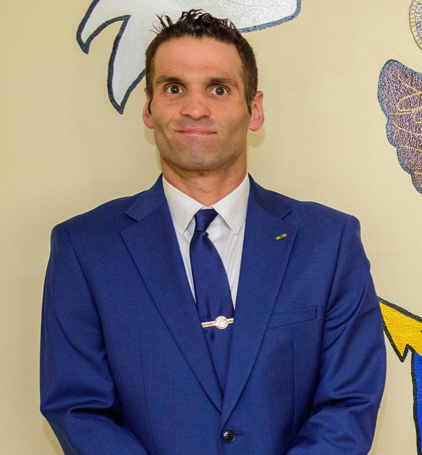 Peter Howey, a 2020 Marywood University graduate and Petty Officer First Class (PO1) in the U.S. Navy, isn't one to let obstacles stand in his way. He boasts an impressive Naval career spanning 15 years and eight deployments that have taken him to every continent short of Antarctica. Through it all, Howey did what he does best — powering ahead and not giving up.

Currently in pursuit of a master of science in criminal justice, Howey reflects positively on his career in the Navy, including three instances when his education was put on hold from deployments to Africa, Cuba, and Italy.

“It would have been difficult for me to complete the master’s program if it wasn’t offered online,” said Howey. I knew what I got into when I went for my bachelor’s degree. The deployments may have put things on hold, but it’s what I signed up for. I don’t know if I could go about the master’s program in that same way.”

Like so many adult learners, United States Navy Petty Officer Peter Howey, who is a Scranton native, would not have been able to pursue a master’s degree without the flexibility of online classes. Marywood University is the only regional program with both undergraduate and graduate degrees in criminal justice. A special feature of the program is the optional five-year master's degree in Criminal Justice offered to qualified undergraduates. This arrangement permits students to complete a master's degree in one year, following completion of the four-year Marywood bachelor's degree program. A traditional master's degree in Criminal Justice is also available.

“Marywood has a lot to offer”, said Howey. “For me, I love the university’s remoteness. I love the atmosphere on campus, it’s perfect. Marywood also has incredible teachers like Dr. Patrick Seffrin, who had a real impact on my life. He really supported me when I was in Africa. Marywood always goes above and beyond.”

Marywood University is one of only two local institutions included in U.S. News and World Report’s “Best Colleges for Veterans” category. The “Best Value” ranking considers a school’s academic quality. Marywood offers support for accessing and using educational benefits, the transition from service to academics, and helping students maximize both their military experience and education when entering the civilian workforce.

Dr. Patrick Seffrin, Howey’s teacher and academic advisor, said, “Peter is a good example to other students in terms of his work ethic and overall positive attitude. He’s ambitious, pursuing his master’s in criminal justice while also serving our country as a member of the U.S. military.”

Howey is stationed at the Joint Expeditionary Base Little Creek-Fort Story in Virginia Beach. The base covers nearly 4,000 acres of land with 7.6 miles of beachfront area. There are 18 large ships home ported there with an additional mix of 126 smaller craft.