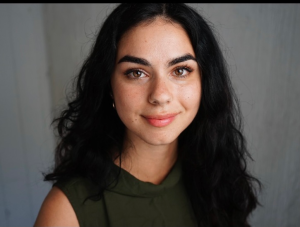 During her time at Marywood University, alumna Melina Barry collected an impressive list of credits. She wrote and directed her own play, The Sound of Rain. She also directed The Curious Incident of the Dog in the Nighttime and The Lesson by Eugene Ionesco. She played roles such as Blanche Dubois from A Streetcar Named Desire, and Lil’ Bit from How I Learned to Drive. She even won a Certificate of Excellence for her audition for the national Playwriting Program staged reading auditions. The mark left behind by Barry is undeniable, making her arguably one of the most talented students to ever grace the theatre stage in Marywood’s Sette LaVerghetta Center for Performing Arts.

“Marywood shaped me as a person,” said Barry. “The relationships I cultivated with not just students but teachers as well, will serve as a foundation for the rest of my life. When I need advice on something, I still call my professors. We’re like a family. We’ll always look out for each other. It’s a unique environment that I will always cherish.”

Barry found her true passion after starring in A Streetcar Named Desire during her sophomore year. Her portrayal of Blance Dubois, one of theatre's most iconic and demanding roles, was widely praised. Until that point, the only roles she envisioned for herself were that of a child therapist or licensed counselor. She had a vague, future image of herself sitting across from clients, listening to their stories, giving advice and helping them; that was an image that Barry liked. Developing screenplays, reading submitted scripts, and starring in dramatic roles; that’s an image Barry loved.

The self-reflection a student goes through when considering a change of majors is particularly galling. The decision will undoubtedly influence their career trajectory — for better or worse. For someone with as much passion as Barry, life tends to fall into place. Her path to happiness hasn’t been easy, but life rewards those who keep moving forward.

Barry recently starred in a short film titled, The Burden of Beauty, which is scheduled for release later this year. Taken from the film’s official YouTube trailer description, “A young and lonely woman's feeling of isolation is deepened after she takes part in a high-profile photoshoot and learns the destructive power of self-image.” The film was written and directed by Rory Michael Colarossi, filmed by Matthew Wise, and co-stars Christopher Alu & EJ Leeson.

“Melina is a terrific actress,” said Colarossi. “Her range and emotional depth effortlessly elevated the words of my screenplay. Melina is a fearless performer whose skills are not terribly common for someone her age.”

Following graduation, Barry accepted a literary internship at Florida Studio Theatre (FST) in Sarasota, FL. Barry spends her time doing what she loves; what she’s passionate about. Some of her responsibilities at FST include reading scripts, writing, and helping with solicitation .

“There’s an exchange of energy in theatre,” said Barry. “I absolutely love theatre but I prefer cinema. I enjoy the subtlety of it. Something as simple as raising an eyebrow says something. I just love everything about film, even meticulously setting up cameras for one shot. It’s so cool when you realize how much goes into filming. It’s an art.”