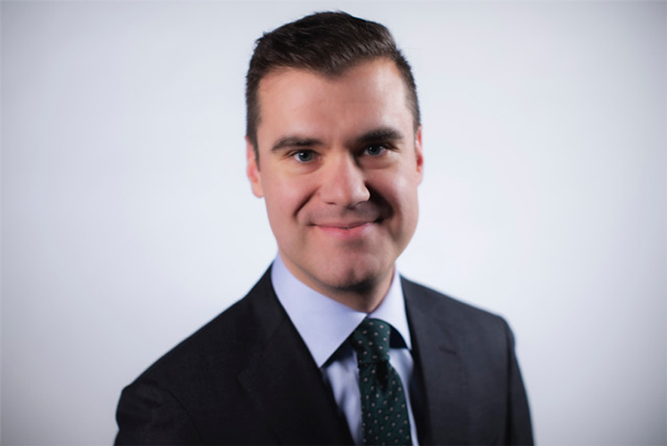 David Graf, Hellertown, PA, who graduated from Marywood University in 2006 with a Bachelor of Arts degree in Digital Media and Broadcast Production, is a star both on and off-camera. The award-winning multimedia producer has led video and photo content creation on various media channels for Nuna, Pottery Barn Kids, and Nordstrom, while also producing video profiles for Access Hollywood, ESPN.com, and NBC’s Today Show.

Graf believes that the success of his career stems from one thing: Day One experience.

“I loved Marywood’s radio station and television studio,'' said Graf. “That hands-on experience gave me a leg up on the competition when I began applying for broadcast jobs.”

The advice and education Graf received from mentors like Douglas Lawrence, Ph.D., Associate Professor of Multimedia Communications, and Ernie Mengoni, Marywood University Coordinator of Broadcast Production, inspired his love of digital media and broadcast production. Graf believes the emphasis that his mentors placed on preparation and using a collaborative approach in all aspects of storytelling served as a launch pad into his highly successful career in broadcast and multimedia production.

“I knew instantly that David had the tenacity to succeed and excel in whatever he ultimately chose to do,” said Mengoni. “Even as a first-year student, David had determination, drive, and a strong-willed attitude.”

In 2021, Graf’s team won 45 Telly Awards for excellence in non-broadcast production. The Telly Awards annually showcase the best work created within television and across video for all screens. Receiving over 12,000 entries from all 50 states and 5 continents, Telly Award winners represent work from some of the most respected advertising agencies, television stations, production companies and publishers from around the world.

In 2016, Graf was part of the team at Runner’s World that was nominated by the American Society of Magazine Editors for best interactive feature and won the Magazine Industry Newsletter’s award for best interactive feature for “40 Million Steps Around the World.” In addition, the magazine was nominated by the Magazine Industry Newsletter three consecutive years for Best Overall Use of Video.

Graf is just as good in front of the camera. In November 2021, he returned to host the 47th season of Scholastic Scrimmage, a televised academic quiz show for high schools in the Greater Lehigh Valley region. Graf, who took over the hosting gig in 2019, was a contestant during the 2001 season as a member of the Pen Argyl Area High School Scholastic Team.

“There’s a lot of prep that goes into the show,” said Graff. “But it’s so much fun. The kids make it fun.”

The PBS39 broadcast is aired throughout Eastern Pennsylvania and Western New Jersey.

David’s digital production and hosting skills were developed at The Center of Multimedia Communication at Marywood University. The state-of-the-art training ground includes a radio station and television studio, complete with editing suites and newsroom.

To view examples of David’s work with Nuna Baby Essentials and Runner’s World, click on the links below.

LEARN MORE ABOUT FILM, TV, AND DIGITAL PRODUCTION AT MARYWOOD »