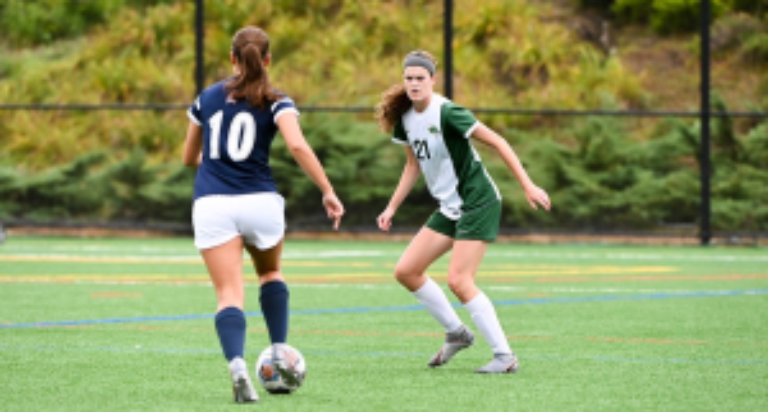 Brooke Longstreet, Scott, Pa., a senior Exercise Science major at Marywood University, has played her favorite sport of soccer since she was four or five years old. She has been actively involved in athletics throughout her life. Brooke, who was on the soccer, track, and basketball teams at Lakeland High School, plays on Marywood’s soccer team under the direction of Coach Andrew Smith.

Brooke decided to attend Marywood because she wanted to stay local for her college education. Additionally, both her mother and her older brother are Marywood alumni, so she was already familiar with the University. Her guidance counselor and her high school coach also helped her to make this decision. Originally admitted to Marywood as an undecided major, Brooke eventually declared Exercise Science as her major after exploring her options and meeting with people on campus.

She was admitted to Marywood as a student athlete and believes that preseason really helped her to adjust to college life and get a feel for the campus. According to Brooke, it’s a little bit easier to get acclimated to campus when you’re a member of a team, because you already have connections with students and faculty.

“We don’t have personal group mandatory study halls unless someone’s GPA is lower than they need it to be,” Brooke states. “We always help underclassmen with anything that they need,” she continued.

Since the pandemic halted their plans to make a comeback after losing the championship match in 2019, Brooke is happy that the team is able to have a normal season this year. While the soccer team stayed active last year by dividing athletes into “pods” of six to seven people, they couldn’t get the same team bonding and chemistry that they normally would. The team has now made a full return to traditional game play.

Following graduation, Brooke plans to enroll in graduate school, either in person or online, to pursue a career in Exercise Physiology, although she is still deciding where to study. She observed that she likes strength and conditioning, exercise testing, and the prescription side of her career choice.

Brooke’s advice for new students is to get involved early, so they can build relationships with people on campus, which makes it much easier when you need help. “Everyone [at Marywood] is in the same boat as you are, so don’t be nervous,” Brooke recommends. “The only way to make it better is if you try to become comfortable around fellow students and to expand your experiences by joining clubs, sports, etc.”